Mercedes-Benz exclusively produces the all-electric EQS SUV at its North American passenger vehicle plant. These vehicles rolling off the line is a key step in Mercedes-Benz Cars’ global initiative to produce eight all-electric vehicles at seven sites on three continents this year. The full-size EQS SUV is integrated into series production at the Mercedes-Benz Tuscaloosa plant in Alabama, which has been the production site for large SUVs bearing the three-pointed star since 1997. Tuscaloosa serves as a key production location for Mercedes-EQ luxury electric SUVs: the EQS SUV and EQE SUV, which go into production later this year. 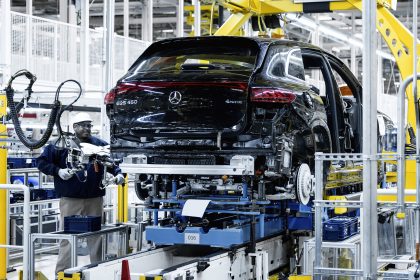 Jörg Burzer, Member of the Board of Management of Mercedes-Benz Group AG, Production and Supply Chain: “Our production network is very well positioned for the sustainable and rapid scaling of electric vehicle volumes. With the new EQS SUV joining our production portfolio of all-electric Mercedes-EQ models, we reached another important milestone in our strategy to go all electric by the end of the decade – wherever market conditions allow. I am absolutely sure that our great Tuscaloosa team will make the electric SUV another global success.”

Michael Goebel, President and CEO of Mercedes-Benz US International (MBUSI):

“We have a highly skilled and motivated team that has absolutely delivered in the successful product launch of the new EQS SUV. Our Team Members in Tuscaloosa have shown a lot of flexibility, energy, and commitment in helping us to achieve milestone after milestone since our first Mercedes-Benz rolled off the production line more than 25 years ago. The employees here at the site can be proud that the first all-electric SUV from Mercedes-Benz and its battery are being built in Alabama.”

The new battery factory, operating in Bibb County since March, produces the battery systems for the EQS SUV. That’s on an approximately 300-meter or 985 feet-long production line with more than 70 workstations. A host of components goes into a complete system in a fully digital production process. Moreover, including up to twelve cell modules and what is the EE compartment for the intelligent integration of power electronics. The battery for the EQS SUV comes from a modular architecture. It’s also in use for the EQS and EQE Sedans. With the new plant, Bibb County is now a part of the global Mercedes-Benz battery production network, which comprises of factories on three different continents.

Mercedes-Benz US production at a glance

Since the 1990s, Mercedes-Benz has invested a total of more than seven billion dollars in Alabama. From this amount, 1 billion dollars was invested into the battery plant. Moreover, the logistics centers to upgrade the production line to make EVs. Today, Mercedes-Benz U.S. International (MBUSI) employs around 4,500 people. They also secures an estimated additional 11,000 jobs with suppliers and service providers in the region. Around four million vehicles have left the Tuscaloosa plant since 1997. Moreover, with around 260,000 SUVs rolling off the production line in 2021 alone. Roughly two-thirds of annual production is exported, making MBUSI one of the largest exporters of automobiles from the US.

The new EQS SUV at a glance

With the luxury EQS sedan and the sporty executive EQE sedan, Mercedes-Benz is entering a new all-electric era. The EQS SUV is the third model series with this architecture developed for electric vehicles. The SUV offers plenty of space, comfort and connectivity for up to seven passengers in its avant-garde, luxurious interior. The EQS SUV is also capable of tackling light terrain with ease. That’s thanks to powerful electric motors, responsive 4MATIC all-wheel drive and an intelligent OFFROAD driving mode.