Days before Discovery Channel’s Shark Week, award-winning actor and longtime Oceana advocate Morgan Freeman joined Oceana and Members of Congress to announce the introduction of  a new bill to ban the trade of shark fins in the United States. The bipartisan Shark Fin Trade Elimination Act of 2016 was introduced today by Sens. Cory Booker (D-NJ) and Shelley Moore Capito (R-WV), and Reps. Gregorio Kilili Camacho Sablan (I-MP) and Ed Royce (R-CA). While the act of shark finning is illegal in U.S. waters, shark fins continue to be bought and sold throughout the United States.

“My fascination with science and nature was sparked by work with Discovery Science on ‘Through the Wormhole with Morgan Freeman’.  For it inspired me to intensify my work to protect our planet’s inhabitants,” said Freeman.

“Sharks are being killed for their fins. That’s much like rhinos and elephants. For they have been decimated due to the demand for their horns and tusks. While shark finning is banned in U.S. waters, we continue to buy. Also sell and trade shark fins throughout the country. By allowing the trade of shark fins within our borders, the U.S. continues to contribute to this global problem. The Shark Fin Trade Elimination Act would not only get the U.S. out of the shark fin trade business. Yet it would also reinforce the status of the United States as a leader in shark conservation.” 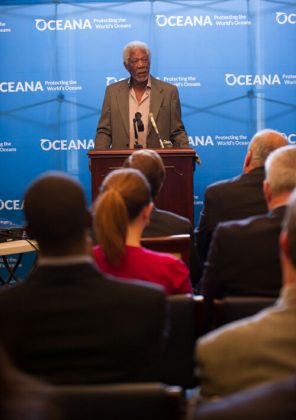 Oceana also released a new report today. Thereby demonstrating why Congress needs to pass a federal ban on the buying and selling of shark fin products. The demand for shark fins is one of the greatest threats facing shark populations around the world.  In fact, fins from as many as 73 million sharks end up in the global market every year.

According to the new report, a nationwide ban on the trade of shark fins would reduce the international fin trade. Also it will improve enforcement of the current finning ban. Finally and send a message to other countries. Especially that the United States recognizes shark finning as a cruel process. One that should not be allowed to continue. To access Oceana’s full report and video, please visit www.oceana.org/FinBanNow.

“Shark finning is cruel and wasteful and it’s putting some shark species at risk of extinction. The United States rightly decided to ban the trade of ivory and rhino horns—yet we still import shark fins, which can be the result of an equally brutal practice,” said Lora Snyder, campaign director at Oceana. “To protect sharks, we need to end the demand for shark fins. Today, the United States took an important step towards achieving this. We applaud the leadership of the bill’s supporters today in helping to end the shark fin trade in the United States.”

Key findings from the report include:

More than 70 percent of the 14 most common shark species involved in the Hong Kong shark fin trade. That’s the historic center of the global shark fin trade. For they are considered at high or very high risk of extinction.

Five of the 11 countries that export fins to the United States have no shark finning bans in place, making it very likely that fins coming into the U.S. are from sharks that have been finned.Shark watchers spend an estimated $314 million on shark ecotourism every year, and researchers expect that to double to $780 million in 20 years.

According to a recent study, sharks are the top species U.S. scuba divers want to see, and they will pay $35 extra per dive to see a shark.There are discrepancies in the estimates of the number of shark fins that  are actually entering and leaving the United States. According to the Food and Agriculture Organization of the United Nations (FAO), other countries reported exporting 1,012 metric tons of shark fins to the United States in 2007.

Below are statements from several of the bill’s supporters:

“In 2011, the Commonwealth of the Northern Mariana Islands was the first U.S. insular area to enact legislation banning the trade in shark fins,” said Representative Gregorio Kilili Camacho Sablan, who represents the Marianas in the U.S. House of Representatives. “Today, 3 insular areas and 11 states have laws on the books to protect sharks. And we are now building on that local leadership by introducing national legislation to ban the buying and selling of shark fins throughout the United States.”

“Every year, it is estimated fins from as many as 70 million sharks end up in the global shark fin trade.” Sen. Booker said.  “Shark finning is pushing some species of sharks to the brink of extinction. With this bipartisan measure, America can become a global leader by shutting down the domestic market for shark fins. Sharks play a pivotal role in marine ecosystems, and we must do more to protect them.”

“Shark finning, which leaves these animals to die a slow and painful death at the bottom of the ocean, is a cruel practice that needs to be stopped. When the United States leads, others follow. We should set an example by eliminating the shark fin trade rather than providing a market to incentivize this illicit activity,” said U.S. Representative Ed Royce (R-Calif.), Chairman of the House Foreign Affairs Committee.

“Cutting the fin off a shark is illegal in the United States, so there’s no reason to treat selling a shark fin as legal commerce,” said Rep. Raúl M. Grijalva, Ranking Member of the House Natural Resources Committee. “Shark fins don’t fall off the back of a truck – they’re bought and sold after being illegally harvested. Tens of millions of sharks are dying every year because we allow the market for shark fins to keep operating. This bill uses the economic might of the United States to protect shark species and the ecosystems they keep in balance. I’m encouraged by the early support it’s getting from both sides of the aisle, and I sincerely hope we can put partisanship aside to get this done.”