My completely revised and updated e book edition Build Your Own Electric Vehicle is the “bible of electric car books.” Because it illustrates how to convert a gas-guzzler to a clean-running electric powered vehicle. As well as how to build one from scratch!

So it’s no wonder that the electric vehicle (EV) movement has broadened to multiple levels of public debate. Because Electric cars solve many problems. First of all, they have zero tailpipe emissions. Thereby costing only pennies to charge to bypass today’s high energy prices. 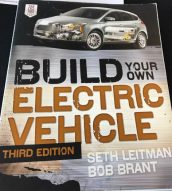 Moreover, electric cars help develop the economy. That’s because electric transportation can be a growing industry that will create new jobs.

So my book, Build Your Own Electric Vehicle, Second Edition with Bob Brant illustrates the process of building an EV from scratch. All for as much or even less money than purchasing a traditional car. That’s as well as transforming an internal combustion engine vehicle to electric.

Yet this addition includes more photographs and descriptions of each components. That’s the motor, battery, controller, charger, and chassis. Finally and step-by-step instructions on how to put them all together. I mean as well as a list of suppliers for necessary parts, make it easy to build a working vehicle.

Consequently, my intent was to create a useful guide to get people involved in the EV movement. As well as to encourage them you to contact additional sources in their own “try-before-do/buy” quest.

Also, moreover to point readers in the direction of others who have already done it. I mean electric vehicle associations, consultants, builders, suppliers, and integrators. In conclusion, to familiarize them with the electric vehicle components. Finally, to go through the process of actually building or converting their own vehicle.

We know certainly this is a timely point is the price of oil and its relation to the entire book. When Bob Brant first wrote this book, he determined that $100 for a barrel of oil was the worst-case scenario. As I finished writing this book, oil was trading at $142 a barrel. Then at local gas station the price for a gallon of gas was $4.50. Now it’s about that in California!

In addition. Bob Brant was the author of the first book. Also some might say he was ahead of his time. I mean in his passion to convert to electric. The first edition of this book was published in 1993.

Yes, while there have obviously been updates and technological advances since that time, many of the concepts in that first book are still in use today.

In conclusion, Bob was involved with NASA projects such as the Lunar Excursion Module, and the Earth Resources Technology Satellite.  He also was with a company that worked on the Lunar Rover.  Consequently, Bob was always fascinated with every electric vehicle breakthrough. He was convinced of its personal and environmental benefits. Furthermore, he was curious why stronger steps had not been taken to make electric vehicles a reality.  Finally, I like to think of this updated edition as a tribute to Bob and other forward thinkers like him.