Frankfurt. Just like New York’s famous district, Hesse’s largest city, Frankfurt am Main, has much more to offer than money trading and investment advice. Culture, for example. And that can be wonderfully experienced in the MINI Cooper SE (fuel consumption combined: 0.0 l/100 km; electricity consumption combined: 17.6 – 15.2 kWh/100 km according to WLTP, 16.1 – 14.9 kWh/100 km according to NEDC, CO2 emissions combined 0 g/km).

So get into the fully electric four-seater and enjoy: both the car and Frankfurt – according to a study by the Economist, Germany’s most liveable city. For start-ups, Frankfurt is said to be the best place after Munich and Berlin. And when it comes to culture? It looks just as rosy – especially when measured against its size.

A good 700,000 inhabitants and their guests have around 20 stages for about 50 free groups at their disposal on a city area of 248.31 square kilometres. About 500 monuments, art objects and memorials await the curious. The museum landscape is more diverse than in almost any other German city. The so-called Museumsufer between Eisernem Steg and Friedensbrücke has something for every taste, from film to architecture museums. The classics include the Schirn, Städel and the Museum of Modern Art – the Caricatura Museum of Comic Art, on the other hand, is a laugh riot. There are a large number of places of interest to visit around the clock – starting with medieval wayside crosses to historicist bronze monuments, 14-metre tall light installations, graffiti art or the “Comic Art” of the “New Frankfurt School” placed in forests and meadows with 15 objects in Frankfurt’s “GrünGürtel”.

You should start with a full battery. By 2030, there should be 350 fast charging points and 875 normal charging points in the city. Perfect for the MINI Cooper SE, whose high-voltage battery has a gross capacity of 32.6 kWh. The charging power is up to 50 kW. At fastcharging stations, it takes just 35 minutes to charge the completely empty battery up to 80 percent.

If you enter the city in the MINI Cooper SE from the Northwest Cross to visit a few cultural highlights.  I mean it doesn’t take long to find yourself in the middle of the artistic world. Example: Kleinen Nelkenstraße 19 in the Hausen district is home to Atelier 19.  All which is run by four artists with creative play forms of educational offers.  That’s with photographs on the subject of industrial culture, artistic works on the ambivalence of human sensitivities and conditions within the field of tension of nature versus culture, as well as paintings with a focus on white, black and the shades of grey in between.

A lot of heavy fare. So the next stop in neighboring Rödelheim is just right, because it takes you into a fairytale kingdom. The Brentanopark, the country estate of the Brentanos in the 1820s, is located directly on the Nidda. The Petrihaus on Rödelheimer Parkweg, restored in 1998, is the last surviving Swiss house in Frankfurt, so popular in the Romanesque period. And while you’re here: via the A 648 you can get to the famous “Hammering Man” at the entrance to the exhibition center – a 21.5-metre-high, 32-tonne moving sculpture by Jonathan Borofsky. 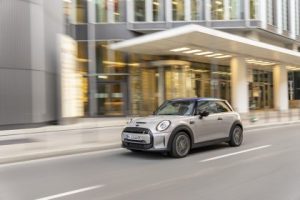 The old town next to it is not another destination this time – but Goethe cannot be left out. After passing the Gallusanlage, a stop at Grosse Hirschgraben 23 is a must: this is where the great poet was born, where he lived until 1795, and where those, who are interested can immerse themselves in his world. And they can admire, among other things, the astronomical clock that Goethe’s friend Wilhelm Friedrich Hüsgen had built in 1746. And don’t worry: thanks to the MINI Cooper SE’s compact length of 3.845 meters, you can always find a parking space.

After a short refreshment with typical Frankfurt fare such as “Ebbelwoi” (apple wine, at least for the passengers), Handkäs mit Musik (sour milk cheese in a spicy marinade) and eggs in the famous “Grie Soß” (green herb sauce), the route could lead north.

The next stop is at the Albert Schweitzer Centre at Wolfsgangstraße 109.  All where numerous originals from Schweitzer’s estate and his time as a doctor.  Located in Equatorial Africa are waiting for children and young people in a permanent exhibition.  That’s because it is especially them who are to be made aware of the goals and philosophy of the Nobel Peace Prize winner.  I mean that’s thanks to films, hands-on activities and various stations. He once said that Frankfurt had cast a special spell on him.

After this visit, the journey continues north to the Chaplin Archive at Klarastraße 5.

The private museum is open to the public.  For it deals with the American cinema legend on two floors.  I mean the collection includes around 6,000 individual pieces.  Because that’s the total work of art Charlie Chaplin. Moreover, the film archive with about 450 copies of the 80 Chaplin films is also located there.

What would Chaplin have said about the MINI Cooper SE? He probably would have just smiled mischievously.  You know, at the acceleration from 0 to 60 in 3.9 seconds.  Moreover the 0 to 100 km/h in 7.3 seconds thanks to the powerful 135 kW/184 hp electric motor. And then asked to stay in the car even longer. That can be done – after so much culture and city.  Because with a detour to the Taunus preferably to the Feldberg.

To do this, we steer north-east and then we cross the A5.

Finally and then enjoy the comfort of the premium small car.  All in the first Taunus overhangs.  Those which moreover makes cornering a pleasure that’s thanks to the sophisticated chassis.  Moreover the also low centre of gravity. We drive up to the Feldberg at an altitude of 881 metres with the distinctive 50-metre-high transmission mast built in 1973 at the top.

On the way back downhill, the MINI Cooper SE’s two-stage recuperation can be used to great effect.

The engine acts as a generator.  All feeding the energy generated in overrun mode.  Yes folks and into the high-voltage storage system. Because the driver can activate the particularly intensive recuperation.  For it’s the “one-pedal” feeling via the toggle switch.

This allows the MINI Cooper SE to decelerate perfectly even without using the brakes. And even if the brake pedal is not used, the brake lights still indicate the sharp reduction in speed.

Finally, it’s back to Frankfurt – for after-work. The scene in Frankfurt am Main is more established than in any other city. Never boring, always unique. Almost like a MINI Cooper SE.

In conclusion, all figures are already calculated on the basis of the new WLTP test cycle.  It’s also NEDC values listed. For  they have been calculated back to the NEDC measurement procedure where applicable. WLTP values are used as a basis for the definition of taxes.  Moreover and other vehicle-related levies that are (also) based on CO2 emissions.  Finally and, where applicable, for the purposes of vehicle-specific subsidies. In addition, and for further information on the WLTP and NEDC measurement procedures is also available at www.bmw.de/wltp.